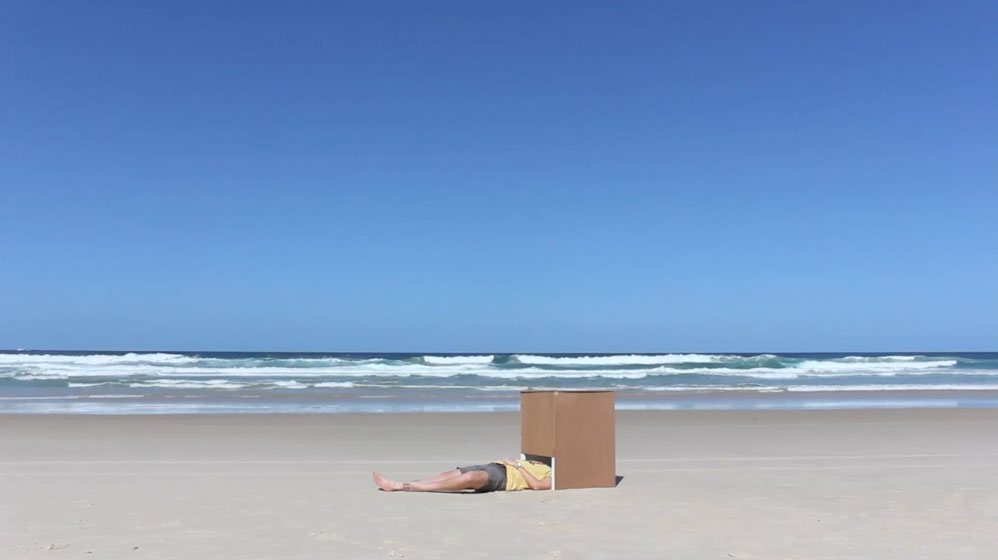 This is a digital video artwork, 8 minutes and 37 seconds long, currently shown on a loop on a small box shaped TV. As the scene is largely unchanging the work is described in its entirety rather than audio described in real time. The daytime scene features a person lying on the sand at the beach, their head and shoulders in a brown box. The flat light sand is in the lower quarter of the work, followed by a thin strip of ocean with lapping waves, and the top two thirds feature a clear sky that progresses from light blue at the horizon to a darker blue at the top.

The person is in the centre, taking up one third of the width of the beach. The brown box has a neat rectangular slot cut out at the base, in which their head and shoulders are positioned, and the edges and inside are painted white. The box appears to have an even width and depth and is longer in height, standing upright with the sides about half the height of the person. The person is wearing a light-yellow t-shirt and khaki green shorts to just above the knees, their left arm bent at the elbow and hand resting on their waist, a watch on their wrist. The other arm is not visible, and the person’s left leg is slightly bent and resting along the sand, while the other is outstretched. For the full duration of the video the person does not move at all. The background is mostly static apart from the waves, and with the occasional person walking past or walking into the water in the distance, at times noticing the person in the box and at other times paying no attention.

The person featured in this work is the artist themselves and they have described this work as a recording of their experience inside a home-made viewing box made in the style of artist James Turrell’s Skyspace work. Turrell is an artist who for more than half a century, has created works with the medium of light, and he is interested in the physical feeling and power that space can give. His Skypaces are featured throughout the world and they are described as ‘a specifically proportioned chamber with an aperture in the ceiling open to the sky. Skyspaces can be autonomous structures or integrated into existing architecture. The aperture can be round, ovular or square.’

Kinly Grey is a Brisbane/Meanjin based artist whose practice engages with sensory experiences and exploration of art as affect, with affect being an area of theory relating to emotion. Grey works with a range of mediums and approaches, including instructional works, performance, atmospheric installations, light, smoke and metaphysics, all of which evoke physical and emotional sensations.