The Annihilation of the Blacks 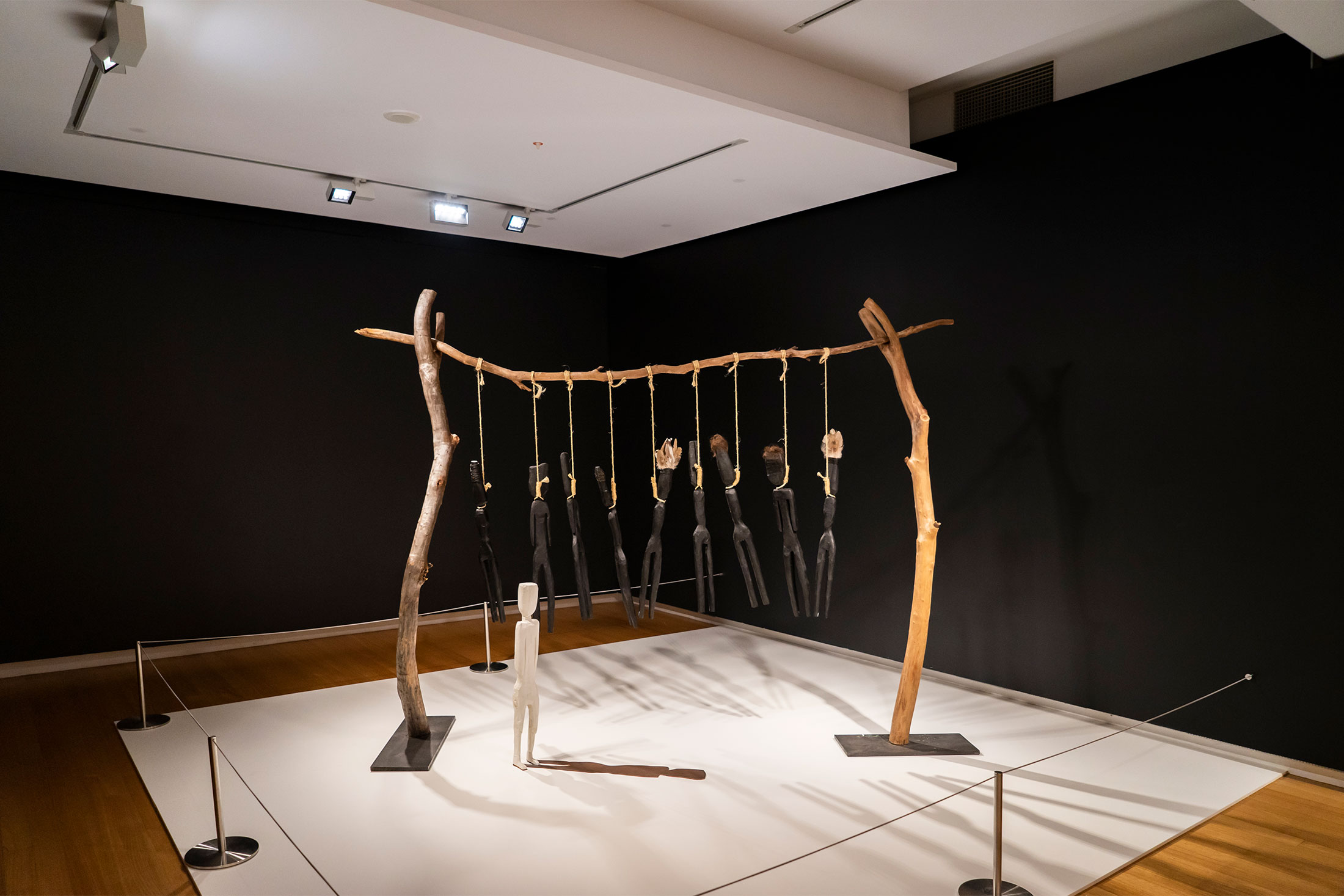 Fiona Foley, The Annihilation of the Blacks, 1986. Note that this work contains sensitive content.

This early artwork by the artist is a sculpture in 13 pieces that consists of wood, synthetic polymer paint, feathers, string. The overall dimensions are 204.5 centimetres high by 267 centimetres wide and 85.7 centimetres deep. There is a horizontal branch that is held upright by two forked branches that curve slightly inwards and are on small black rectangular bases. The natural wooden branches are light brown in colour, similar to a smooth gum tree and are left natural. Nine human figures painted black are suspended with twine from the horizontal branch at even intervals around the figures’ necks. Some are adorned with feathers, and each vary but have a similar form, with a long-elongated body, forked parallel legs and rectangular heads. Each head shape is similar but unique and the heads do not have any faces. Each of the hanging figures bear a distinction. Some are left simply as wooden objects, two of the figures have feather head-dresses where black and brown feathers point upwards around the crown of their heads, and others have tufts of hair attached to the front of their heads. The texture of the wood in these figures is quite rough with lines running vertically through the wood. One freestanding human figure who is a similar shape is painted white and standing near the vertical branch on your left, with an attached diagonal shadow of the same height and shape, painted black. The room is painted black and this sculpture sits on a large white plinth. The view is dramatic because of the contrast of the light structure in a dark room, along with the subject matter of symbols of people hanging from a pole.

Annihilation of the Blacks was made in Foley’s final year of study at the Sydney College of the Arts in 1986 and was that year acquired by the National Museum of Australia. The work was the Museum’s first major acquisition of work by an Aboriginal artist based in a city.

Annihilation of the Blacks references a massacre that happened on Badtjala Country—the story of which was passed down through oral history. The figures are suspended to reflect actions of colonial soldiers at the time of the massacres—they would suspend bodies up in trees as a warning to Indigenous survivors. A white figure casts a long shadow in the foreground, indicating the long shadow cast by these colonial actions.