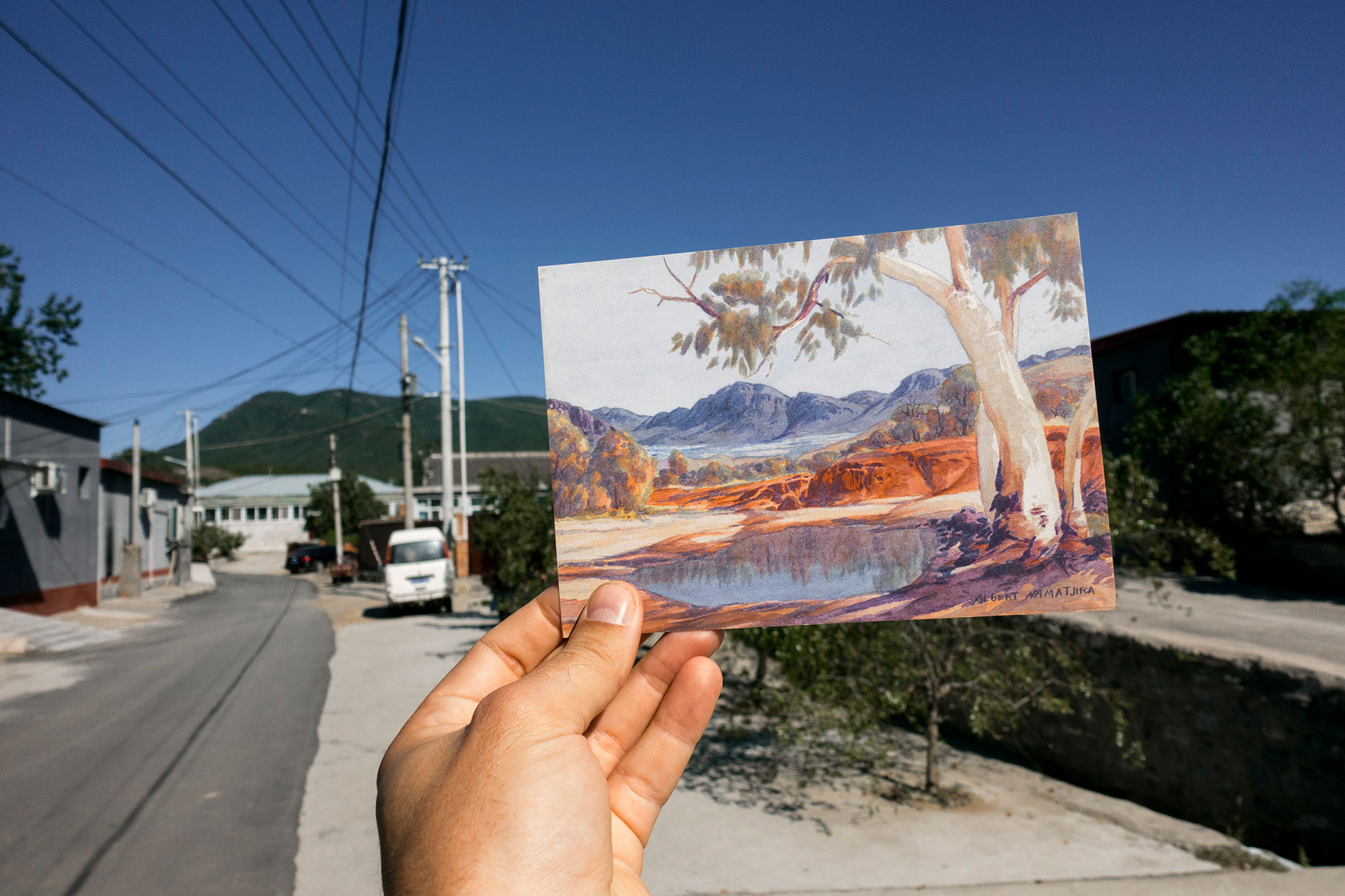 This Placed, in brackets, almost but not quite, by Dean Cross, 2018.

This photograph is made from pure pigment print on cotton rag and is 84.1 centimetres high by 126.15 centimetres wide. It is framed in a thin white frame with a thin white mat board. At the base of the work, in the centre, is a left hand from the wrist up, holding a postcard featuring a watercolour painting of an Australian landscape. The hand is holding the image in the bottom left-hand corner between the thumb and fingers, and both fill almost half the overall photo.

The postcard of the watercolour painting is superimposed on an urban landscape, with the mountains in the postcard lined up with the mountains behind. The landscape in the postcard consists of translucent layers of soft vibrant colours of an Australian central desert landscape. There are blue mountain ranges in the background, orange boulders and bushes dipping in the centre of the midground, and three white Ghost Gumtrees in the bottom corner on your right. The leafy branches from the largest tree arch over and are reflected in the top of an oval pool of water in the foreground. The bottom right is signed Albert Namatjira in capital dark purple letters.

The background scene is slightly out of focus and consists of a thin grey unmarked road on your left that turns sharply out of the scene. It is flanked by flat pale brown earth, and powerlines on either side, which cast shadows along it. Along the far edge of the road and the photo, there is a grey wall of a long building with a dark orange stripe along its base. Directly ahead, there is a long low-set white building with a row of rectangular windows and a corrugated iron roof and other less distinct low-set buildings behind. The back of a white van is on the right of the road, directly above outside edge of the hand. Dark green leafy bushes spread in a diagonal row from these building around the white van and behind the hand and postcard. Alongside these bushes is a dark diagonal shadow, then a pale diagonal patch of earth, and green shrubbery above, which blends into the deep green mountains that spread from edge-to-edge work across the middle of the photograph. The sky above the mountains is mid-blue and completely clear.

The artist’s hand is the one featured in this work and he is holding a postcard of Albert Namatjira’s artwork, ‘Ghost gum and waterhole, Central Australia’ circa 1955 against the backdrop of a mountain range in China. Cross was on an artist residency on the outskirts of Beijing when he made this work, thinking through what it meant to be Indigenous in a foreign land and grappling with the lack of understanding around issues of colonisation in contemporary China.

Dean Cross is of Worimi descent and raised on Ngunnawal/Ngambri Country. He is a multi-disciplinary artist working primarily across painting, sculpture, video and photography. His creative career began as a contemporary dancer and choreographer for leading Australian dance companies before retraining as a visual artist. Through his practice there is often a physicality and reference to the body. Cross is interested in creating works that challenge colonial narratives of Australia and the Pacific through drawing on national, archival and personal histories.