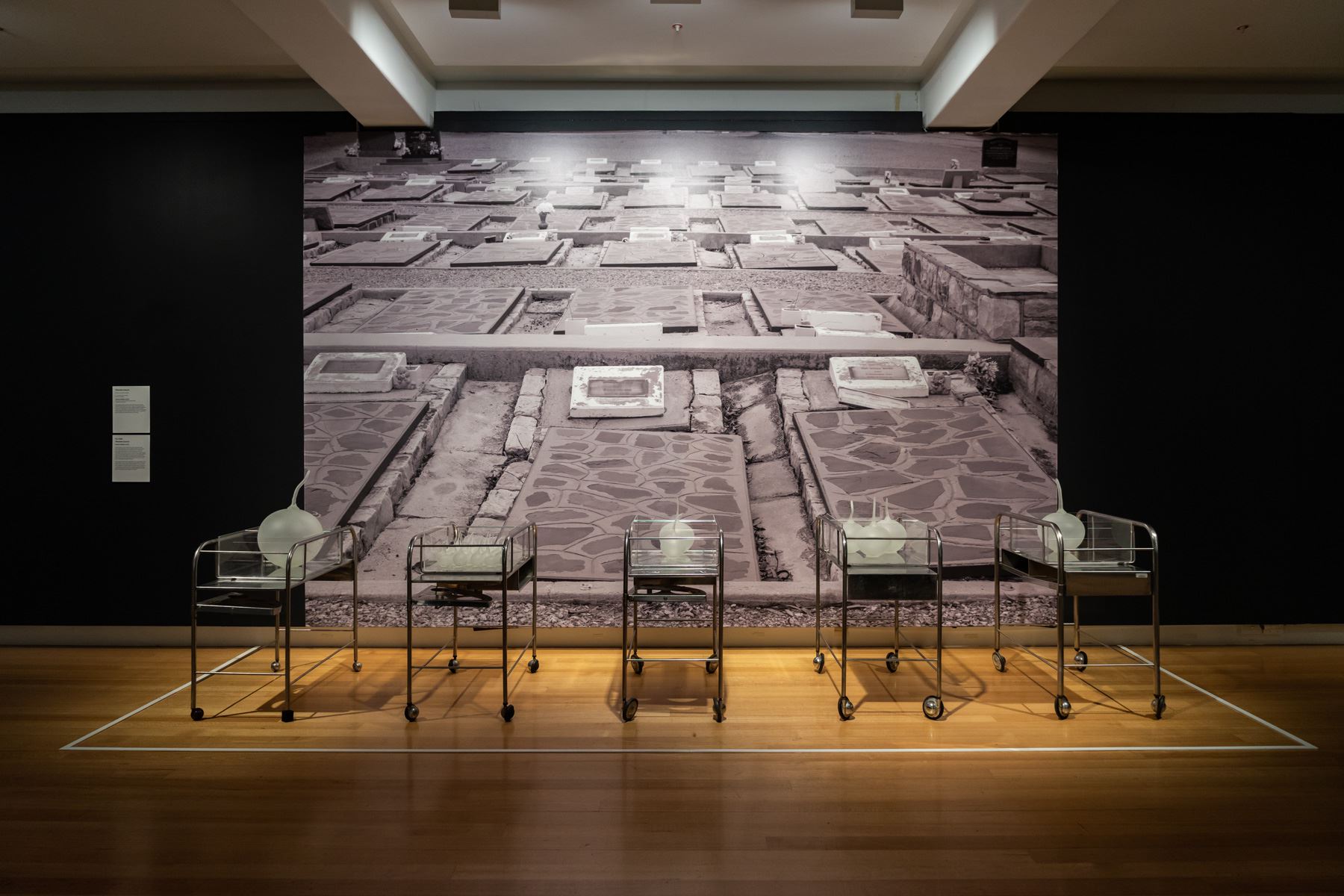 Yhonnie SCARCE Fallout Babies (installation view) 2016, blown glass, acrylic and found hospital cribs, dimensions variable. Collection of the artist. Courtesy of the artist and THIS IS NO FANTASY, Melbourne. Photo by Louis Lim.

Listeners are advised that this audio description includes sensitive content about infant deaths.

Fallout babies is an installation artwork consisting of five hospital cribs that are placed in a row in front of a large-scale photograph printed on adhesive vinyl that is 3.5 metres wide, and about 2.8 metres high – the full height of the gallery wall.

The black-and-white photograph depicts seven rows of concrete graves, running horizontally from top to bottom. Almost all of the graves are exactly the same length and width and equally spaced apart. The graves have simple, flat headstones lying in the ground, with engraved metal plaques mounted on them. While a handful of graves have plastic flowers placed on them, most appear slightly neglected, and the scene is quite bleak. The pathways between the rows of graves are covered in gravel.

In the first row, which takes up the lower half of the photograph, one grave in the centre is damaged. The concrete is out of shape, as if the earth under it has shifted, like a footpath that has given way to tree roots, causing it to crack. The grave to its right has a metal plaque resting crooked on it, as though it has come loose from another grave and blown over to this one. On this grave, there is a square vase mounted to the right of the headstone, with a teddy bear decoration on the front side, and a small bunch of plastic flowers placed in it, leaning heavily to the right. The bottom line of text on the plaque on the headstone reads, ‘AGED 4 MONTHS’. On the lower-left side of the photograph, there is another grave in the front row with the same teddy bear vase. The bottom line of text on the plaque on the headstone reads, ‘STILLBORN’. In the six subsequent rows of graves, the text on the plaques is illegible, but about a third of the 40 or so graves in the photograph have teddy bear vases on them.

Arranged in front of this photograph is a row of five stainless steel hospital cribs, placed equal distance apart, running from left to right the full width of the photo. Each crib is set on wheels, has a tubular steel frame, and holds a clear acrylic box with an open top, the box measuring about 30 centimetres wide, 50 centimetres long and 15 centimetres high. The first crib on the left holds a blown glass sculpture in its acrylic box. The sculpture is the shape of a bush plum – a plump sphere about 20 centimetres in diameter, with a glass stalk rising from the top. The glass used to create these forms is opaque and unable to be seen through. The next crib to the right holds 30 smaller glass bush plums. They are roughly the size of Christmas baubles, some a bit smaller, some a bit bigger. The third crib holds two glass bush plums, each about 10 to 15 centimetres in diameter. The fourth crib holds three, and the fifth holds one, also about 10 to 15 centimetres in diameter.

The cemetery in the photograph is Woomera Cemetery, in the artist’s hometown in South Australia, about 600 kilometres from Maralinga, where the British military carried out nuclear testing in the 1950s and 1960s. More than half of the graves from this time period are graves of babies and toddlers. The artist was born in 1973, just over a decade later. The nuclear tests have been the subject of a Royal Commission in the 1980s and class action lawsuits by both veterans and the local inhabitants, over disabilities and premature deaths believed to be caused by the fallout.

The artist’s use of glass references the way that the desert sand was literally melted into glass by the atomic blasts. Scarce belongs to the Kokatha people from central South Australia and the Nukunu people from the lower part of the Flinders Ranges, near Port Augusta and Port Germein in South Australia. Her glass forms often take the shape of native foods, in reference to her culture. These objects also represent human bodies. She explains, “They're a perfect metaphor for bodies, even though they are food. I chose the bush plum because of their embryonic state, like the moment the sperm enters the egg, the initial beginning of life, but these kids didn't get that chance…”